How are heroes matched for battle?

Heroes are matched based on their current level when the Arena battles begin.

First, we try to match the hero within a very tight range of levels. For example, a level 10 hero may match with heroes between level 8 and level 12.  If no heroes are available within that level, we expand the range until a match is found, and then the battle begins!

How are high level heroes matched for battles?

High level heroes are matched the same as low level heroes. The only difference is that the initial level range is a little wider, and because of high levels, they may have to expand their range further to find a match.

When high level heroes battle each other, luck plays a very big factor in determining the outcome, so even if the levels are thousands of levels apart, either hero still has a chance to win.

How do you determine the winner of each battle?

How many Coins do I win per battle?

The number of Coins assigned to each battle depends on the sum of the heroes participating in the battle.

More Coins are assigned to battle for higher levels than lower levels. And it is all relative and dynamic based on the current total of all levels and number of battles necessary to determine a champion hero.

How many battles are there, and how do the rounds work?

If there is an odd number of heroes, there may be some heroes that battle twice in a single bracket round.

In all of the final rounds, 90% of the battle prize goes to the winner, and 10% goes to the loser.

The final 2 heroes battle for the Championship title.

The Champion hero does not die, but it will NOT carry over to the next Arena round.

Champion heroes will be listed under "Surviving Heroes" in your "Heroes" tab and we may have special Champion perks coming in the future.

If my hero loses a battle, is that hero dead?

Yes, the Arena is setup as a series of bracket elimination rounds. If your hero dies this means that your hero has been eliminated from the Arena.

As an opposite side effect, this also means that a single hero can win many times more than it's initial cost if luck prevails in the battles.

How can I watch the battles?

You can watch the battle replays by going to your "Heroes" tab, and selecting "View Battles" from either your "Fallen heroes" or "Surviving Heroes" tab. 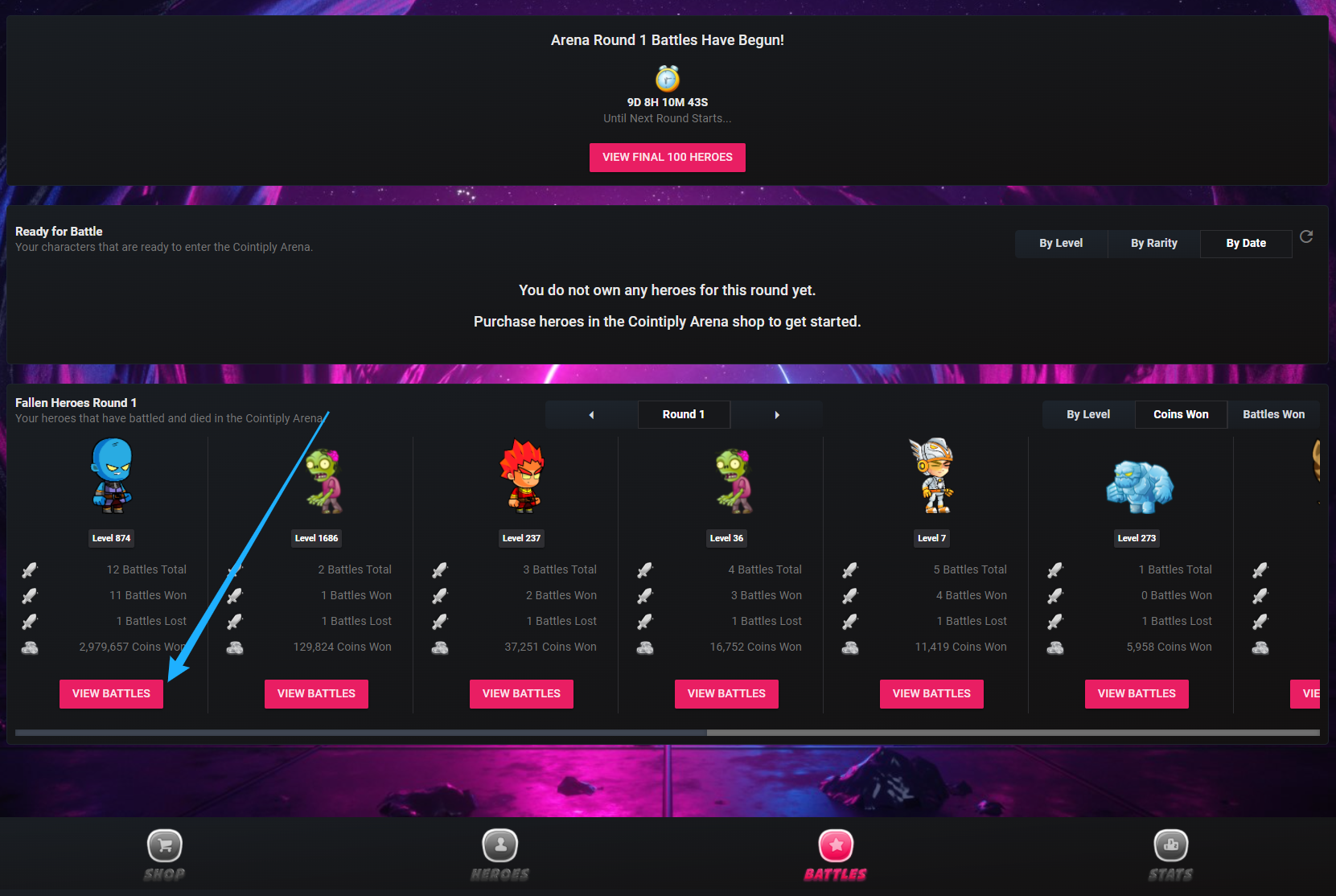 You will see a list of all battles the hero has participated on, and you can click "Watch Battle" to view the battle visuals. 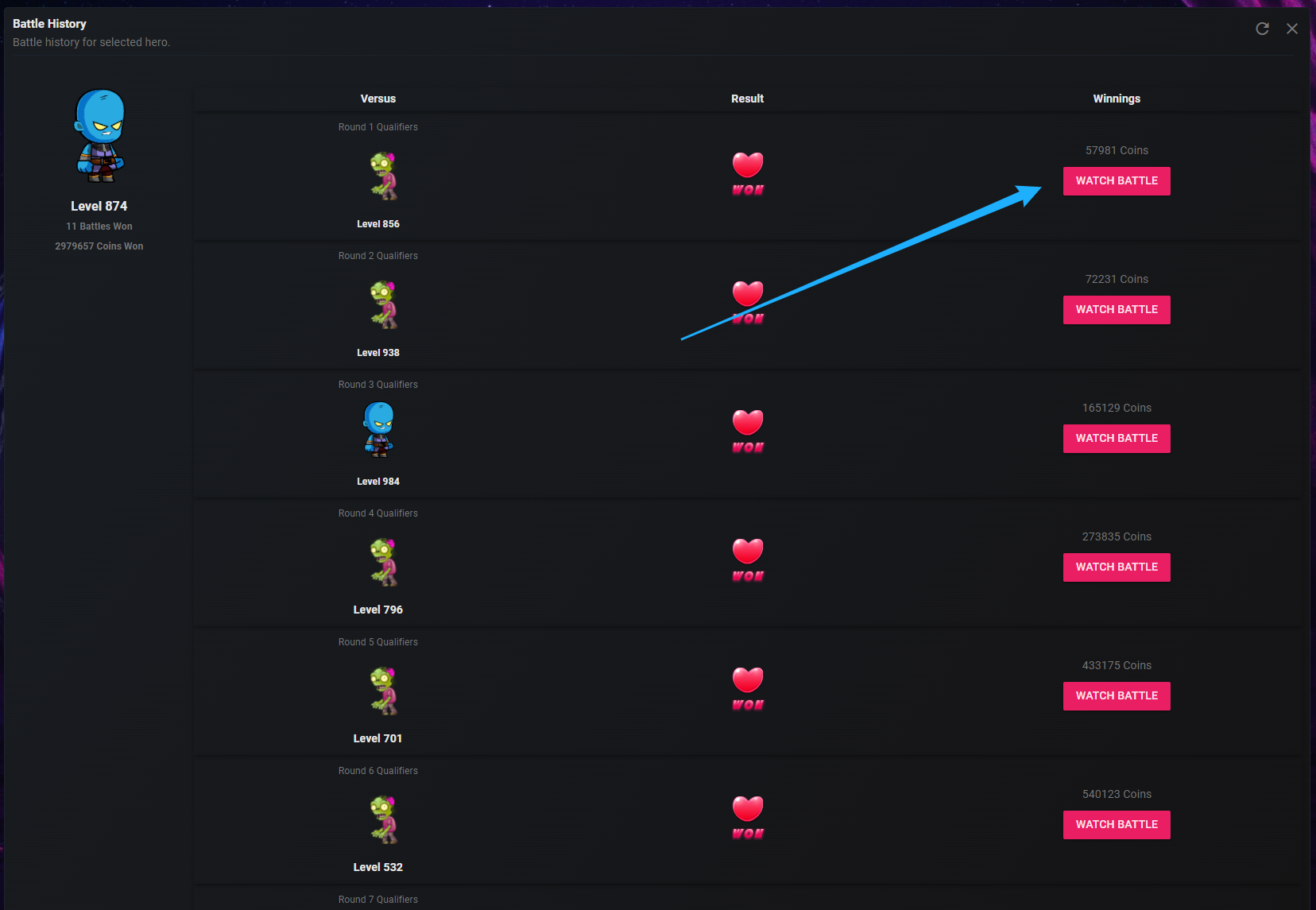 IMPORTANT: Battle visuals are just for fun and are simply a re-simulation of the outcome that was determined during the actual battle logic. They do NOT represent the real math behind each battle outcome.

How long does the battle period last for?

Battles run for 24 hours and then the Arena resets.

For example. Battles will start on May 1st, as soon as the day starts (UTC time) and will continue for 24 hours until the Champion is determined.

On the start of day May 2nd, the new Arena round will begin and new heroes can be purchased again to restart the cycle.

When does the new Arena round start?

See the answer above, in the last question.

V
Vincent is the author of this solution article.

Did you find it helpful? Yes No

Send feedback
Sorry we couldn't be helpful. Help us improve this article with your feedback.