Cointiply Arena - How to Get Started Print

What is Cointiply Arena?

Cointiply Arena is a fun new way to win Coins. Purchase Arena heroes & upgrade your heroes throughout the month. Every time a hero is purchased, the Arena prize pool increases. At the end of the month all heroes get automatically entered into Arena battles, where they will battle other heroes for Coin prizes.

Arena Referral Rate:  You will earn 5% of all purchases and upgrades made by any members you have referred.

The last 100 heroes remaining each month compete for 20% of the overall Arena prize pool - huge prizes will be awarded!

How do I get started?

Step Two - Level up your hero as high as possible to have the best chance of winning.  You can upgrade each hero as many times as you want. The number of levels your hero gains each time changes based on real time supply and demand.

Strategy Tip: You can optimize your heroes' upgrades by monitoring the level up rates and pulling the trigger when the rates are high. The cost for each upgrade always remains the same.

Step Three - At the end of each month the Cointiply Arena battles automatically begin! Every Arena hero will battle other heroes for 24 hours until all winners have been decided.  Every time one of your heroes wins a battle, you will receive a portion of the arena prize pool.

The last one hundred heroes remaining will battle it out for their share of 20% of the overall prize pool! 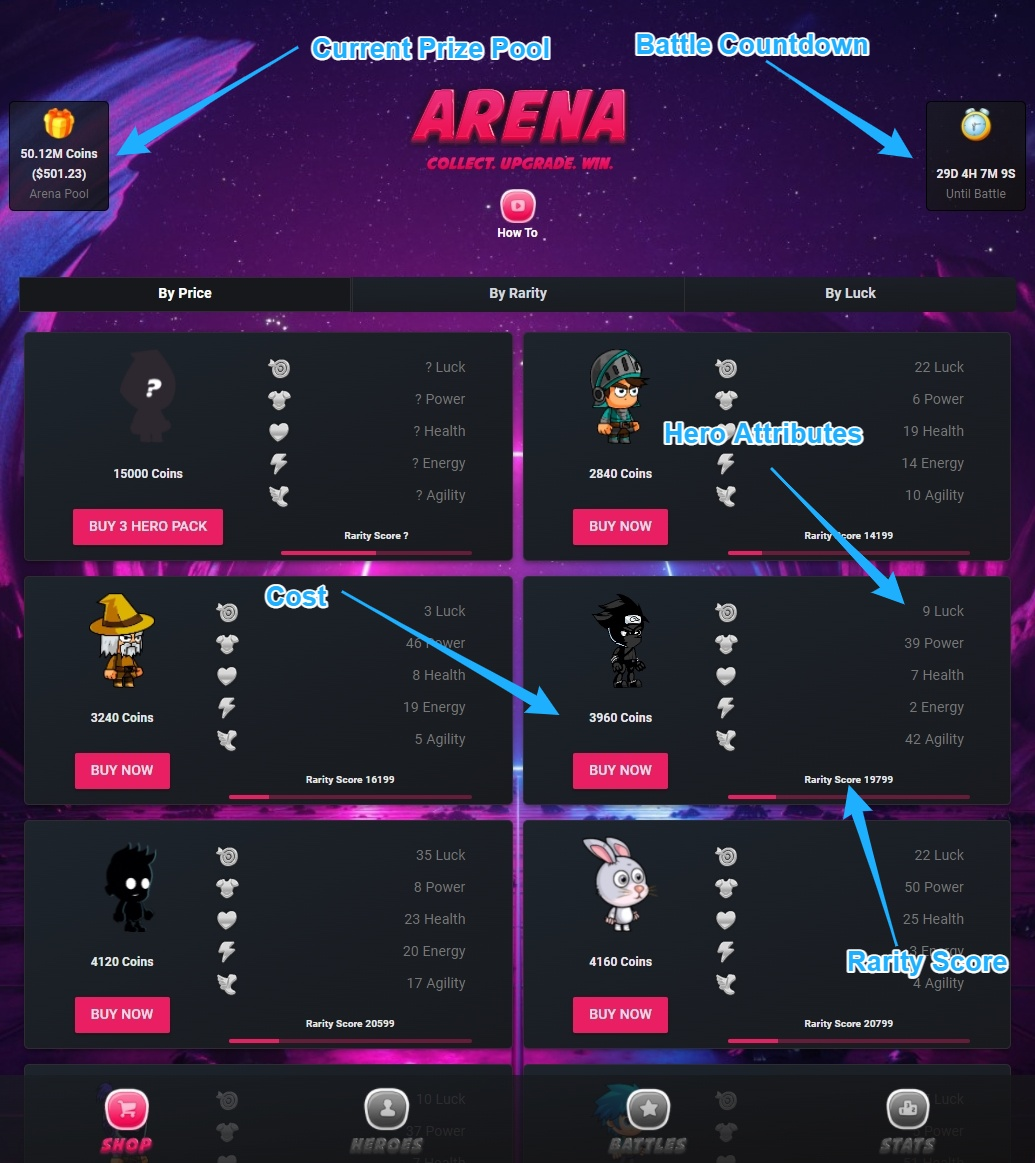 Can I earn more Coins than I spend?

Every Arena pool starts with a 5 million Coin prize pool contributed by Cointiply. Additionally, if you pay attention to upgrade rates and only upgrade when rates are good, you can make your hero stronger for cheaper than other members - this is a huge advantage!

Heroes are matched with similar level heroes, meaning if you paid less than your competitor to reach the same level, your potential return is higher for each battle!

Is this pay to win?

No. Each hero has a fair chance of winning.

The Arena is designed so everyone has a fair chance to win, regardless of how much you have spent on heroes.

When battles begin, your hero is matched with other heroes of a similar level so that each battle is fair. The amount of Coins that goes to the winner of the battle is also based on the total levels involved in the battle - ensuring that the prize pool is distributed evenly.

Even a level 1 hero has a chance of winning multiple battles in the initial rounds.  When it comes down to the final 100 heroes, heroes with a higher level that are still alive do have an advantage, but luck can still play a huge role in determining the winner.

The most important aspect, if you do level up your hero, is your CPL (Cost Per Level). You can read more about how your CPL can help you under "How do Battles Work".

How do I upgrade my hero?

After you have purchased a hero, you can go to your "Heroes" tab to view and upgrade your heroes.

After selecting a hero to "Upgrade" you will see a chart listing the historical upgrade rates, as well as the current upgrade rate.

The upgrade rate will be something like "Current Upgrade Rate: 5 to 10 Levels"

In this scenario, when you click "Confirm Upgrade", your hero will be upgraded randomly between a minimum of 5 and 10 levels.

Strategy Tip:  The higher the upgrade range, the better! The upgrade Cost always remains the same, so you get more levels for less!

Note: You do NOT have to watch the level up animation if you don't want to. Your hero will still level up.

What is the rarity score?

The rarity score is simply a quick way to identify strong heroes. The higher the rarity score, the better a heroes overall attributes are.

Keep in mind that "Luck" is one of the most important attributes in a hero.

Rarity scores and other attributes may have additional uses in the future.

How do battles work?

Battles start automatically at the end of each month.  Each of your heroes will battle other heroes, 1 vs. 1 - and the winner is rewarded with Coins. Purchases, upgrades, and wins will be listed in your Activity. If your hero loses a battle, the Arena battle is over for that hero.

The higher your heroes level, the better chance you will have of winning more battles!

Each battle is determined the combination of the heroes level and the heroes attributes.

Here's how it works:

Strategy Tip:  For the first round of battles, your Hero is matched with other Heroes with similar levels.  Only in the final 100 Heroes battle will your Hero battle much stronger (or much weaker) heroes. Therefore, the most important thing is how much you have paid to level up your Hero. The lower your average cost per level is, the better!

Example of a battle result:

The winner in this scenario is Character 1, but Character 2 could have also won if they were lucky!

When do battles start?

Battles run for 24 hours, and then the Arena resets and starts again, you DO NOT keep your heroes after the Arena battles are over.

You can view the battle count down at the top right of the Arena dashboard.

V
Vincent is the author of this solution article.

Did you find it helpful? Yes No

Send feedback
Sorry we couldn't be helpful. Help us improve this article with your feedback.